how to clean jewelry silver at home
Introduction:

Watch is not only used for time but since a long time it is also used as a fashionable item. The variety of look and design were used to modify and make the watch attractive. Various jewelry items such as silver, gold, diamond and platinum were incorporated in various proportions by the manufacturers to give watch an attractive look.

In the history, 1524 is known to be the earliest watch manufacturing year, however early manufacturing begins in France and in the year 1574 a watchmaker named as Charles Cousin shifted to Geneva in Switzerland from France and settled there and got citizenship after thirteen year. During that period, the watch was being used a jewel and became available for masses much later.

Charles Cousin founded a watch guild in Geneva and during the period Switzerland watches became famous. There were various watchmakers in Switzerland before Charles Cousin, but the commitment of Charles Cousin to organize the sector has given boost to the quality manufacturing and propagating the quality to the world. The timepieces made during the period were not perfect as of today. These first timepieces were inaccurate and most of the watches have only hour hand and had to be wound twice a day.

During the period 1600 to 1700, the watches remain a jewelry pieces and the period also saw technical innovation. Two types of watches pendulum and pocket watch were made available during the period. During 1675, a spiral balance spring was used, which improved the accuracy of timekeeping from a fraction of hour earlier to a fraction of minute. Till 1675, the pendulum type were used in the neck, Charles II of England introduced long waistcoats and men used the pockets of these waistcoats to put the watches.

By 1715, English watch makers started using diamond as bearings. By the ends of century the upper bearing of the balance shaft were likely to have the diamonds. During the early 1800’s, the machines for manufacturing watches were developed and clock parts were being manufacturers and subsequently the cost of various watches came down. In late 1800’s many well-known watch companies came and croton watch is one of them.

Croton Watch Company Inc. was established in the year 1878 and since then the family is continuously running business. Croton Watch Company Inc. is operated from New Jersey, USA. More than 128 years old company is known worldwide for the classical watches. Since the inception of the business, the family is fostering the business in not only United States, but throughout the globe.

Croton wristwatches are classically designed to keep the trends and advances in trend setting for the future generation. The various models of Croton watches have been featured in various magazines including Harpers Bazaar magazine. The models available with Croton are sometimes better than the costlier models supplied by other companies. Croton watch comes with a lifetime warranty.

how to clean jewelry silver at home 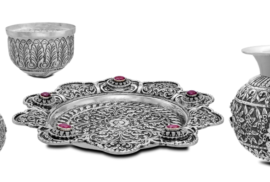