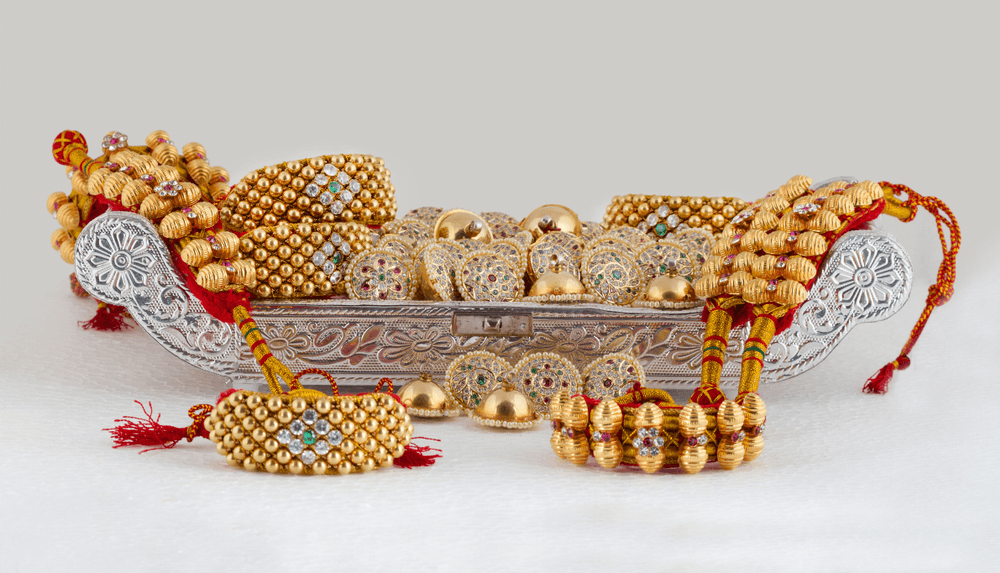 It is an ancient art of jewellery making was conceived in the royal courts of Rajasthan. Since then, Jaipur has been the centre for Kundan jewellery. Traditionally, it was made with gold and unique glass stones called Kundan stones. Today they are made of gold and uncut diamonds and other precious and semi-precious stones. Thin foils of highly refined pure gold or ‘Kundan’ is beaten and stuffed in between the gold framework and the stones to create this style. In some cases, the reverse side of the jewellery is enamelled in colourful Meenakari designs. This variation is called Kundan Meenakari. Kundan jewellery has come more in the spotlight ever when Aishwarya Rai played a princess role in Jodha Akbar movie and wore heavy Kundan jewellery.

Rajasthani Ornaments Which Are Worn by a Bride

It is called ‘Rakhdi’ or ‘Borla’ in Rajasthani. The signature piece of the state because unlike other styles, it usually finish in a huge bell-shaped or spherical piece embellished with precious stones.

It is a chain of small Rakhdis which forms a headband. Some wear ‘Khaancha’ in addition to Sheeshphool. The Khaancha is a band worn on the upper forehead and has the Rakhdi attached at its centre.

The ‘Nath’ of ‘Nathni’ is a nose ring worn on the left nostril, complete the adornment of a bride’s face and ensure that the bride looks her absolute best.

The earrings are worn are usually worn by a Rajasthani bride is known as Kundal Bhutti. It is a long and very thick Earrings worn by the bride, it can often reach as low as the neck of the bride.

A special necklace called “Aad” is worn around the neck, Is a signature style of the Rajasthani Bride. Another a larger and more elaborate necklace is also worn by the bride which is called “The Raani Haar” or Queen’s necklace. The choker necklace of uncut diamonds called ‘Timaniyaan’ likes every bride.

This is red bridal bangles made of lac which is worn with gold bangles encrusted with precious stones and diamonds.

Bajuband is a special ornament often worn in Rajasthani weddings. It is worn on the upper arm by the bride and is made of gold and precious stones or Meenakari designs.

The elaborate ‘Haath Phool’ designs are a testimony to the Mughal influence on Rajasthan. It consists of a statement centrepiece which is joined to the rings on each finger and the wrist, with chains of gold and precious stones, decorating the back of the palm and wrist.

It looks like a chain also called ‘Kamar Bandh’ or ‘Kardhani’ or ‘Tagdi’ made of gold and Polki or Kundan accentuates the waist.

‘Bichiya’ that is a toe ring, usually made of silver and stones. It is a mark of a married woman and is gifted to the bride on the eve of the wedding. Anklets also known as ‘Payal’, made of gold and precious stones adorn her feet.

How To Clean Your Custom Jewelry

A History Of Contemporary Jewellery